Semi-trucks, also called 18 wheelers, are the most dangerous vehicles on the roads. The typical semi-truck can be as heavy as 80,000 pounds, and its trailer can be up to 53 feet long.  Most accidents involving  semi-trucks are serious and often cause serious injuries or death.     Extensive data on truck accidents compiled by the National Highway Traffic Safety Administration (March 2020) indicates that there were 4,951 deaths caused by large truck crashes in 2018 alone, a more than 50% increase over the last ten years. Truck accidents happen on Interstate 65 in Cullman, Decatur and Huntsville  on a daily basis. Commercial trucks, such as semi-trucks, have a tendency to be quite large and heavy, but semi-trucks, or tractor-trailers as they are also called, take things to the next level.  When a  semi-truck tailgates a car or loses control,  things can  get ugly and deadly  very fast.   The following are a few of the most typical ways that big rigs injure and kill other drivers in Alabama.

It is not uncommon for a driver to lose control or an improperly loaded semi-truck to  rollover. Excessive speed is one of the most common causes of rollover accidents. Because semi-trucks have a higher center of gravity, they roll over more easily than a car. If a truck turns too quickly, it can become unbalanced and start swaying to one side which can lead to a rollover.The Federal Motor Carrier Safety Administration explains that truck driver error accounts for 78 percent of rollover crashes across the country. When a fully loaded truck rolls over there is usually major property and personal injury damages. Semi-trucks can rollover if the driver improperly brakes or turns incorrectly, When this happens,  cars and other smaller vehicles end up being crushed underneath it and other vehicles can end up crashing into the wreckage of a rolled over truck as well creating a pileup. Whiplash, slipped discs, herniated discs and nerve damage can all too easily occur in this type of crash. The forces involved in a rollover crash can create serious back injuries including spinal cord injuries that can cause permanent disabilities, such becoming a paraplegic or even a quadriplegic.

An underride accident occurs when a smaller vehicle crashes into the side or back of a tractor-trailer and slides underneath. A semi-trailer has a space underneath it that other vehicles can go under.  A car, or at least a portion of one, can frequently fit into this area between the underside of a truck trailer and the road. Sometimes, in what are known as underride incidents, cars can become jammed in this under area. Over 300 individuals are killed in underride accidents in the United States each year, making these truck collisions among the worst on the road.
Most underride accidents occur due to:

Jackknifing is a phenomenon unique to vehicles with trailers such as semi-trucks. When a truck jackknifes, its trailer swings out to the side and will form the shape of an “L” or “V” with the truck’s trailer. The point where the trailer is hitched to the truck cab swivels and allows the trailer to follow the turning of the truck. While this allows for more maneuverability, it can also cause a semi-truck trailer to skid out of control and swing out sideways from behind the cab. Cars are easily hit by jackknifing trailers that can take up several lanes of the road. Main ways that negligent truckers cause a jackknife include:

Tire blowouts on conventional automobiles have the potential to be extremely devastating, but they are particularly deadly on semi-trucks. Semi-trucks typically have eight to eighteen tires, but even with that many, one blowout can have fatal results. Because each tire is crucial in supporting the enormous size and weight of the truck, a semi-truck driver can easily lose control of their vehicle and cause an accident if one blows out. Smaller vehicles experience a jerking motion in the direction of a flat tire because the support there gives way. The extra weight the tire is holding on semi-trucks causes this jerking motion to be more pronounced.

The results can be disastrous if an 18-wheeler or other heavy truck loses its load on the roadway. Drivers and passengers may be defenseless, and several victims may frequently suffer severe traumatic injuries. The same is true when truckers lose control due to overloaded trailers. Semi-trucks can haul everything from lumber, food, motor vehicles or dangerous chemicals. These can all end up becoming dangerous debris and road hazards should they fall from a truck’s trailer.
Some common examples of unsecured cargo-related issues include:

Companies can prevent these accidents by:

In other cases, a  trucks load can cause an accident when it shifts around the trailer affecting the balance. Improperly loaded trucks are very dangerous since the shifting of weight can tip a truck over and in other cases cause difficulties maneuvering. 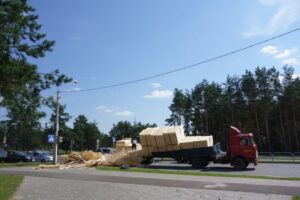 These are some laws that mandate the proper way to secure items within the cargo load. These laws include:

A head-on collision—also known as a frontal collision—occurs when two vehicles, traveling in opposite directions, collide. The point of impact for both vehicles is the front. Possibly the worst type of truck accident is the head-on collision since it can involve the most direct intense forces of any kind of accident. The force of all the truck’s weight and speed colliding with another object moving at high speed in the opposite direction is especially violent and fatalities are very common. The Federal Motor Carrier Safety Administration reports that there are about 4,000 fatal head-on collisions involving large trucks each year in the United States. Yet, this type of accident only accounts for about 3 percent of all accidents involving large trucks. Here are some of the reasons:

Semi-trucks have to take much longer and farther to come to a complete stop. Their momentum carries them farther than smaller vehicles and drivers have to be careful not to break too hard too quickly or they could possibly jackknife. Sometimes a truck can misjudge their stopping distance and hit the car in front of them from behind in what is known as a rear-end accident. Common reasons these accidents occur include:

Large commercial vehicles, particularly semis that have a tractor and a trailer, cannot turn in the same small radius as a personal car. Trucks need to take their turns much more carefully than other vehicles. Wide truck turns occur when commercial vehicles must occupy an additional lane of traffic to complete a turn safely.  Their trailers need to wrap around the entirety of the turn which means that truckers need to take turns extra wide. Turning a semi-truck also can increase the risk of the trailer tipping since the force of moving to the side can shift a trailer’s weight to make it roll over or jackknife.

Truck drivers may cause a wide right turn accident because of poor driving techniques, such as:

Other common causes of wide turn accidents include:

Recovering compensation after being injured by a commercial motor vehicle is more complex than recovering for traditional car accidents. Choosing a truck accident attorney in Cullman, Decatur or Huntsville can be a difficult task. An experienced truck accident attorney can answer your questions as to how to pursue compensation to cover your expenses, both current and future. If you or a loved one has been injured or killed in a truck accident, we are here to help. Call Ferguson & Ferguson now.  Call 256-534-3435.