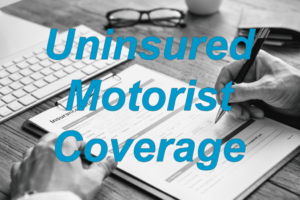 Uninsured and Underinsured Coverage in Alabama

Uninsured motorist insurance (UM) is a type of auto insurance that you purchase to protect yourself and your family against drivers who have no insurance. Underinsured motorist protects you if the other driver does not have enough insurance. What do you do if the driver who struck you does not have sufficient liability insurance? What if he leaves before you can ask him for his information, or even worse? Insurance against uninsured and underinsured drivers shields you financially from negligent drivers. Uninsured or underinsured motorist coverage is used when the at-fault driver doesn’t have enough liability coverage, or none at all. Unfortunately, there are a lot of drivers in Decatur and Huntsville that either have the minimum liability insurance coverage, $25,000.00, or none at all. Alabama is one of the nation’s top ten states for uninsured drivers. When the person at fault hits you without liability coverage, you will not recover any personal injury damages unless you have your own uninsured coverage. If you are seriously injured, and they only have the minimum coverage, you will not recover all of your damages unless you have underinsured coverage. Uninsured mean the other driver has no insurance. Underinsured means they do not have enough coverage to pay for your injuries. Alabama does not require you to have underinsured or uninsured coverage even though it is the most important coverage for you if you are hit by an uninsured or underinsured driver.

How Uninsured and Underinsured Motorist Coverage Works in Alabama

Imagine that you were the victim of an accident that wasn’t your fault. In most cases, you would submit a claim to the at-fault driver’s auto insurance provider, have your automobile fixed, and receive payment for any lost wages or medical costs. You will incur no out-of-pocket costs.

The Difference Between Uninsured and Underinsured Coverage

“Underinsured” is defined in Alabama as inadequate liability limitations to pay for your damages following an accident. If you are in an accident with a negligent driver who does not have liability insurance, you are protected by uninsured motorist insurance.

When you are involved in a collision with a negligent driver whose liability limits are insufficient to pay for the medical costs of any affected parties, underinsured motorist coverage kicks in. In most cases, the at-fault driver’s auto insurance will cover all damages up to the policy limits, after which your underinsured motorist coverage may pay the excess amount according to the limitations you choose.

How Stacking Works in Alabama

In Alabama your uninsured and underinsured bodily injury coverage can stack up to three vehicles on one policy. There is no limit on different policies. Of course your case is still only worth what it is worth. You can’t recover for all of your policies if your case is not valued that high. You must recover from the negligent party first, get permission to accept from your carrier, and then recover from the vehicle you were in plus any other vehicles you may own with coverage. If a claim against an uninsured or underinsured motorist is settled without the injured person first giving notice of the potential settlement to his or her own insurance company, any subsequent uninsured/underinsured motorist claim is waived. See Alabama Supreme Court case styled Lambert v. State Farm Auto Ins. Co., 576 So. 2d 160 (Ala. 1991). The purpose of this procedure is to preserve the insurance company’s right of subrogation against the at-fault driver (uninsured/underinsured motorist). If not done properly, you lose all rights to your underinsured coverages. Lastly, you may also be able to recover from any policies of people living under the same roof with you, even if they have different policies and are not related to you. Your chosen maximum is multiplied by the quantity of vehicles when bodily injury liability coverage for uninsured and underinsured motorists is stacked.

Take the example of a Alabama motorist with $50,000/$100,000 who caused your accident. Lets say you had one passenger with you. If you are both seriously injured, you can each recover up to $50.000 from the other driver. But $50,000 is the most one person recover, and $100,000 the most from everyone in the car, even if there are more than two people. Then both people can recover from the car they were in when hit. After that amount is received, each person has to go to their own cars to recover more money if their cases are worth more money. The passenger cannot recover from the driver’s other cars.

Typically, the amount of UM / UIM coverage in a driver’s policy can be equal to the liability coverage. Some insurance companies will allow you to buy more.  Overall, UM / UIM coverage is inexpensive and is the most important coverage to protect you if you are seriously injured and unable to work for an extended period of time,