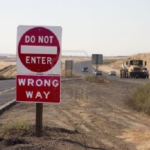 Three people died early Thursday morning when their SUV was struck by an automobile traveling the wrong direction on Interstate 565. The at fault parties’ car was traveling westbound in the eastbound lanes near the Space and Rocket Center. Huntsville Police blocked all eastbound lanes of Interstate 565 after the accident, and were still working the scene after 5:30 am.

The National Highway Traffic Safety Administration reports that wrong way drivers are involved in 1.5% of all fatal crashes. On average about 350 people are killed each year nationwide in wrong-way freeway crashes. Drivers who cause accidents by driving the wrong way on any road or highway give other drivers on the road few options. At interstate speeds, most wrong-way collisions are head-on impacts with often critical or fatal injuries. Wrong-way accidents are most common — and most deadly — on the interstate where drivers may be confused by on-ramps or interchanges.

Causes of Wrong-Way Accidents in Alabama

There are numerous causes of wrong-way accidents in Alabama. Some of the reasons include:

How to Prevent Wrong-way Accidents in Alabama

There are ways to prevent wrong-way accidents such as:

Questions We Ask to Get the Answers you Need

Why Hire an Attorney

If you or a family member was injured or killed by a driver who drove the wrong way and caused injuries, you should speak with an experienced Huntsville personal injury lawyer. At the Law Firm of Ferguson & Ferguson, our attorneys understand the sources of insurance coverage, including the other driver’s policy, the victim’s own policy and the liability of third parties when applicable. When the injuries are serious, every available dollar will be needed to cover bills, lost income and future care needs. For a free consultation, call 256-534-3435 now. We can help.