Can you move out of state during a divorce 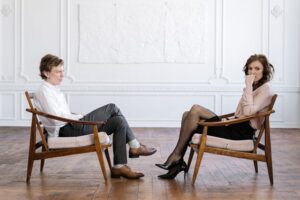 You can move out of state during a divorce. It is possible and legal in all American states, but it may cause you some problems. Still, many people do it, which is understandable – they want to move out of their current home and move on with their lives, preferably somewhere far away. Usually, that far away means to another state – to a place they grew up in, somewhere where they can get a job, somewhere close to dear relatives, etc.

However, be warned that filing for a divorce when you are out of state is not possible. Of course, laws and regulations vary from state to state, even from city to city, so it is better to get well-informed before you start packing your bags and buying that one-way ticket out of state. Here is what you need to keep an eye on.

Is It Possible To Move Out of State During a Divorce

If you or your spouse already filed for a divorce, yes, you can move out of state. A divorce case is nothing like a criminal case where you are forbidden to leave the state. You can go when and where you want as long as you appear in court when required. Thus, if you wish to settle into your new community in a different state, you can do that if you filed for a divorce beforehand.

However, before you move, be sure to meet all the court’s requirements. In some states, those requirements only consist of paperwork that needs to be signed. In others, it consists of several demands. For instance, one of those demands is that either you or your spouse must continue to live in the state where divorce is filed. Moreover, one of the spouses must also be a permanent resident of the state where divorce is filed.

As previously mentioned, divorce laws and regulations vary from state to state, so you will need to talk about them with your attorney. However, one thing is the same everywhere – once you file for a divorce in a particular court, you have to finish everything there. This means that even if you move out of state during a divorce, you need to come back whenever you have to sign some document, appear in court, testify, etc. 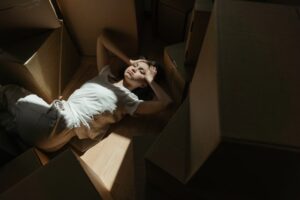 Can You File for a Divorce After Moving Out of State?

Moving out of state during a divorce is only possible if you have already filed for divorce, as stated. But what about filing after moving out of state? Most states do not allow this! You need to file in the state where you and your spouse have lived in the last six months.

However, there are always exceptions (that work in some states and some courts). If you decide to move out of state, your spouse (who has been living in that state for six months and has permanent residency) can file for divorce for both of you. You may need to sign the papers beforehand or do so digitally, depending on the court. Of course, the rule of finalizing the divorce stays the same – you need to return to the state where your spouse filed for divorce to appear in the court, testify, sign the final documents, and address the issues with your spouse and your attorneys.

Moreover, as you plan to move out of the state, you are probably trying to get your budget ready for all the upcoming moving costs. But, do not forget that you will need to get your budget ready for your divorce as well (for your attorney and court costs). The average cost of a divorce is around $12,000! And, the price can be even higher if you hire an attorney who has to handle your divorce while you are out of state.

What About Your Children?

Divorce always leaves a ‘mark’ on children. And, even though you cannot avoid it, you can at least make sure that everything goes as smoothly as possible. This means figuring out the custody before moving out of state. Otherwise, you will have to drag your children to court with you and have them listen to you and your spouse negotiating.

Thus, create a written agreement with your spouse before one of you moves out of state. In that agreement, make a detailed schedule for both parents to spend time with the child. Moreover, be specific that neither of you is giving up the custody rights. This agreement will be highly beneficial to moving out of state with children after a divorce as well! 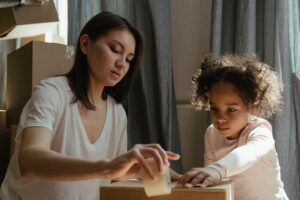 What About Your Possessions?

Your and your spouse’s possessions also must be handled before you move out of state. The biggest problem you may encounter is sharing ownership of the home. One of you will have to give it up. Or, as it usually goes, the person keeping the place should pay half its price to the person leaving it. The same applies to all of your shared possessions! If you encounter difficulties splitting everything in two and coming up with a ‘fair’ agreement, it would be best to hire an attorney right from the start.

And, just with all the things mentioned above, splitting your possessions is something that must be done before one of you leaves. Of course, all the items can be shipped later, but the agreement has to be made and signed while both of you are in the same home. Consult your attorney about this before you decide to move out of state during a divorce!